Thursday, December 12 – The international community must devote more resources to empowering youths with the skills they need to address some of the world’s more pressing challenges. That notion was at the core of the message that our Founder/CEO, Forest Whitaker, delivered in Dakar, Senegal, in his keynote address to the participants in the 2019 edition of the Transformers Summit. Chaired by H.E. Doctor Bandar Hajjar, President of the Islamic Development Bank – a WPDI partner in Uganda – and H.E. Mr. Macky Sall, President of Senegal, the summit sought to harness the powers of science, technology, and innovation to solve development challenges in the developing world and beyond.

At the summit, Mr. Whitaker presented WPDI’s new partnership with the Islamic Development Bank in the Karamoja sub-region of Uganda, where we will expand the deployment of the Youth Peacemaker Network program for the next three years.

In his address, Mr. Whitaker also confronted some of the most challenging issues currently facing the world, including poverty, hunger, climate change, gender equality, and education disparity, urging the audience of world leaders, entrepreneurs, innovators, and thinkers to “leave no one behind” – a notion at the core of the Sustainable Development Goals. He spoke to the transformative change that young people, when empowered with relevant skills and resources, can have on their communities, making them more peaceful and prosperous places. In that regard, he also called attention to the fact that there are currently 408 million youths living in communities impacted by violence. In his words, “We are talking about a group that represents almost a quarter of the 1.8 billion youths around the world. They are a huge segment of the population, yet, they don’t get a fair start in life. By leaving them behind, we take the risk of maintaining the deeper causes of conflict and violence that created these situations in the first place.” Mr. Whitaker expressed that young people want to be heard and there are effective ways to harness their potential, even in the most difficult places, as demonstrated in the daily work of that WPDI undertakes to empower young people from conflict-affected areas with the tools they need to become mediators, entrepreneurs, and educators. This is, he insisted, one of the soundest investments that the international community can make to prepare a future of inclusion and sustainability. 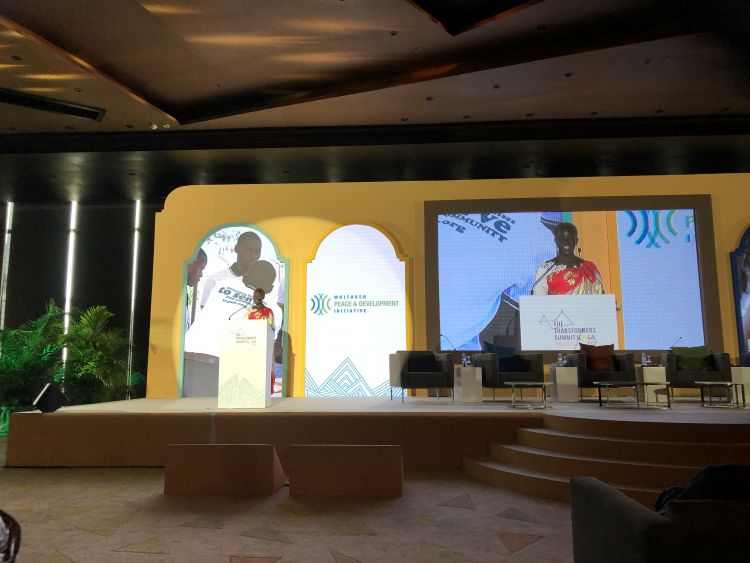 Putting his principles in practice, Mr. Whitaker concluded his speech by introducing Magdalena, one of WPDI’s youth peacemakers from our South Sudan program. A model peacemaker who has engaged in mediation processes, business development, and educational activities, Magdalena has directly impacted close to 4,000 people in her community. She also shared with the audience her dreams and ambition to improve access to education for more girls and women in her country. She asked “When I hear adults talking about change, I wonder why there is no talk of youths. How can adults prepare for the future if young people have no role in the present?”

There may have been no better place that the Transformers Summit to ask such a question to attending officials from governments and development agencies. For transformation to occur, indeed, the global efforts of the international community must in the end start at a grassroots level, at which hundreds of thousands of young people are looking for opportunities to make a difference. This is the mission that Forest Whitaker has set for WPDI, to invest in youth and afford them the most precious of resources – trust.