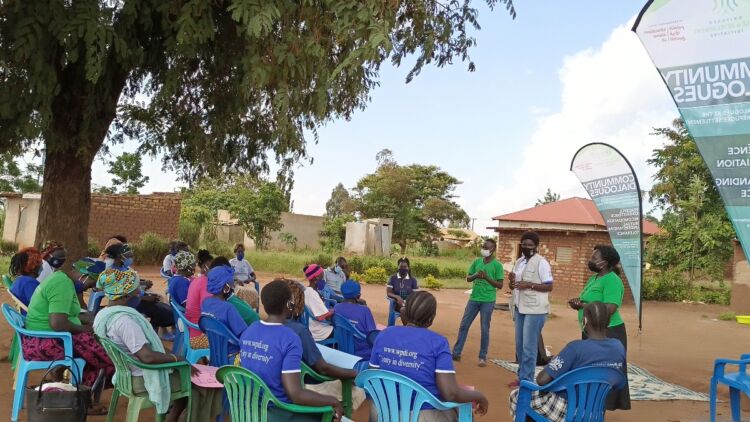 September 27, 2021 – This summer, WPDI held a series of 10 peace dialogues at the Kiryandongo Refugee Settlement to help promote peaceful coexistence and reconciliation within and between the different communities that reside there. Conducted by our Youth Peacemakers and WPDI staff, the series of dialogues – which lasted from  the beginning of April to the end of June – took place on a weekly basis. Ultimately, 815 community members participated in the series, with many later reporting that they are helping reduce conflict and tension within the wider community.

Community Dialogues are one of the key ways our cohort of 42 Youth Peacemakers work to develop a culture of peace and reconciliation at and around the Kiryandongo Refugee Settlement, which is home to more than 65,000 people, mostly refugees from neighboring South Sudan. With such a large, diverse, and vulnerable population, settlement residents often report high amounts of stress and tension between different groups.

Addressing these tensions and conflicts can be a long term endeavour, which we started four years ago and has resulted, according to Ugandan authorities at the settlement, in a significant reduction of violence. But these achievements are not enough and must be expanded to ensure that the communities residing at the settlement adopt a culture of peace that reflects a genuine attachment to values of nonviolence and reconciliation. Combining informational dialogues and awareness-raising workshops, Community Dialogues are  instrumental to the developing of a culture of peace at the grassroots level, notably by creating a safe space where we can foster exchanges between people from ethnic groups that have sometimes been at odds for decades. In this respect, having local youths facilitate these events is critical  as they have a thorough understanding of local situations and the trust of fellow community members. 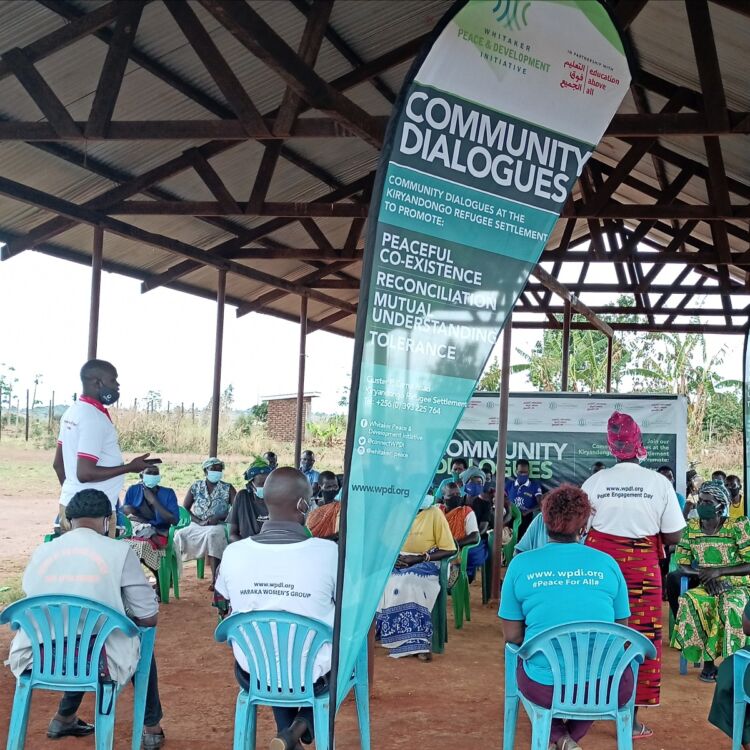 With the levels of conflict and tension exacerbated by the COVID-19 pandemic and its impact on those living in and around the settlement, the dialogues had several positive outcomes, including educating community members about human rights and improving coordination between refugee leaders and host community leaders in their efforts to promote the rights of women and girls.“The dialogues have been so helpful in shaping how young people are behaving and responding to conflict in the community,” said Harriet, a youth leader in the settlement. “They have empowered us to discuss steps and address conflicts amicably rather than by fighting.” Florence, an advocate for settlement residents with disabilities, echoed similar thoughts, telling us how “After a friend recommended that I attend a peace dialogue, I was inspired to work collectively with other leaders and be heard, respected, and included in decision making. It gave me the confidence to address issues and work to resolve conflicts.”

Since these dialogues were held, WPDI’s Youth Peacemakers have continued to work within their communities to build upon the momentum they sparked. During the remaining months of 2021, they will maintain their effort and hold additional dialogues as well, helping build a more peaceful and inclusive environment for those living in and around the Kiryandongo Refugee Settlement.